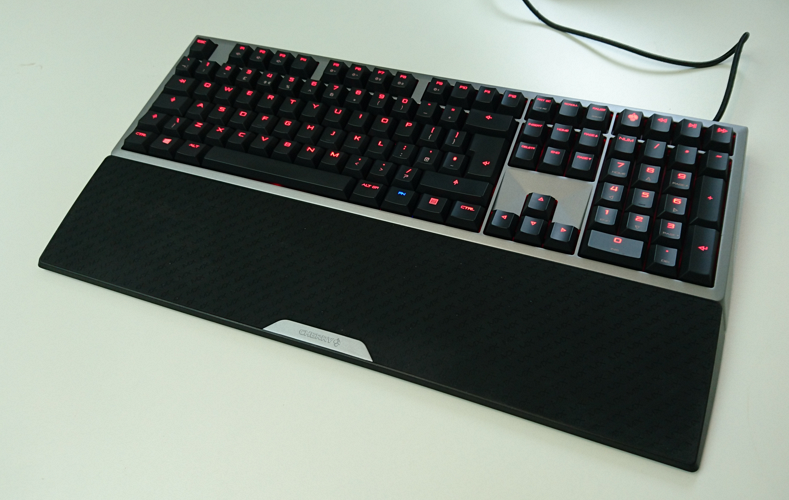 (above) Using Cherry's MX Board 6, you will most definitely see red - but in a good way!

Something very strange occurred to me when unboxing the latest update to my work setup – Cherry’s MX Board 6 Keyboard.

All that know me, would agree that I am very much a chilled out sort of chap – whether it be in carnival or crisis, my general attitude to life is that not much can be gained from overly excitable behaviour. When a potential confrontation situation arises:

1) Try to think from the other persons perspective before replying.

Three great personal rules which have served me well in keeping a cool head whilst others around spontaneously combust.

So it was very much out of character, than on unboxing the MX Board 6 Red (it comes supplied in the type of slinky yet serious looking bag you’d expect a 9mm Uzi to be packed in), I found myself collecting it up in my arms in the manner one might hold a heavy machine gun. Next, after subconsciously adopting a pose not to dissimilar to Silvester Stallone in the movie ‘First Blood’ I went and made matters worse with a reflex gritting of teeth whilst simultaneously thinking ‘don't push me... 'ave some'

Where did that come from?

After mentally pollyfillering up the bullet holes in the pod walls and double checking the landscapers doing the dive way were still alive – I had to sit down for a moment to ask myself some serious questions about the inexplicable resurgence of my combat ready inner self – a behaviour trait not evident since my Commando addicted Commodore 64 days of the mid-1980s.

Having spent a  significant portion of my career in computer system product design, you would have thought that, I of all people should know of the importance of the keyboard to a system. Whilst other computer manufacturers were shipping keyboards with their review systems that worked more like a bag of wine gums stuck to a sheet of Rivita – I would resist the temptation to shave the £40 of the system cost and supply the then Rolls Royce of keyboards, the legendary Fujitsu 4725. Sure enough it always got a very positive mention, and it was clear to me that such a quality product gave the entire review a lift. The sales manager would hate me for pushing up the system price, but then when the awards started piling up he 'got it' and one time joked if we should supply two. Perhaps it’s just a keyboard, but aside from a mouse, it’s the only part of a computer system you touch regularly, and certainly the part which can cause the most discomfort and productivity loss if it’s not right. The system reviewers at the likes of PC Pro, PC Mag, PC Advisor all agreed.

Fast forward to the present day, and somewhere over the last five years, I'd lost my keyboard karma. Was it the relentless procession of laptops and wireless keyboards - perhaps a desire to be cable free with a clear desk? Whatever the reason, having truly battered yet another wireless keyboard, last week I went to repurchase another and then decided that perhaps I should upgrade and get something that was a little better. This time I would focus purely on function and form was going out the window. The concept of a cabled keyboard was literally, back on the table.

But I never counted on ending up with something that would ambush my own inhibitions.

Is Red The New Brown?

For the non keyboard geeks amongst you - you probably have used a number of different keyboards in your time, and perhaps have put down the differences in 'feel' just to the model & make of keyboard. For the better class of keyboards (which are 'mechanical') there are actually many different types of key 'switch' and it's the type of switch that determines how the keyboard will feel when you type on it. There are three main types of switch - 'linear', 'tactile', and 'clicky & tactile'.

A tactile switch has a small 'bump' at the bottom of the keystroke, when you press the key down the point at which the character prints. So you can 'feel' exactly when you pressed hard enough to type something.

A clicky tactile switch has the bump, but also gives a distinct 'click', at which point the character 'prints'.

A linear switch has neither a click nor a bump, so when you press a key there is nothing to tell your character is going to print. You simply need to 'learn' exactly how much pressure is needed. One could say without any 'mechanical' feedback / guide, a linear switch typist needs to be bit 'Jedi-esk' in tapping out his or her starfleet commands.

To prevent ordering & manufacturing confusion, different colours were assigned to different switch types - so some examples:

The general consensus always used to be that for typing work people (that is those non-Jedis amongst us) generally prefer either blue or brown as you get some sort of physical feedback to inform you that you have pressed the key enough. Red switched keyboards are thought to be exclusively the preference of gamers as it's easier to register multiple button pushes if your fingers don't have to press keys all the way down to either a bump or a click & bump.

For my own preference, I have to say I do a huge amount of typing - but weirdly, I have always been a fan of red linear switched keys (did you guess that?)

1) If you happen to work in an almost spherical building (OK perhaps I'm slightly unique on this one) the noise generated by a clicky keyboard can be (if you happen to be sitting in the wrong place) almost deafening as the clicky sounds ricochet off the curved walls and come back amplified many times over to shatter your ear drums. If you don't like the sound of a keyboard gatling gun, then I'd suggest you overlook boards with blue switches.

2) Brown switches, seem to have established themselves as the defacto keyboard standard - good for typists, and people working around them. But to me these keyboards just feel like typing on mushy peas.

3) Red switches, sure they have no physical feedback, but actually because of that, you will find they can be used with a much lighter touch, and because of this (in my opinion anyway) you will be able to type so much faster, and with far less finger movement, so great for RSI. I touch type - meaning I don't look at the keyboard when I type - so typing this blog with the MX Board 6 - the words seem to just slide out from under my fingers..... some reading this admiring my awful spelling and punctuation, might suggest perhaps I take a look down every now and then!?

Wondering if I was the only pod working non-gamer that prefered red switched MX keys for typing - when writing up this blog post I took a break to see if there were any like minded souls out there. I am quite relieved to report that although not a scientific sample, I did find quite a number of people out there that were big red switchers like myself, and many of those switching from brown. So it does seem that perhaps I'm not a keyboard weirdo after all, perhaps maybe red is the new brown?

This was therefore the main driving factor for purchasing the MX Board 6 Red, as it says in the name, it's a keyboard built with red Cherry MX switches, and so make sure all your co-workers get this (would they care?) - the keys are back lit with red LEDs too!

How does one sum this product up?

If ever you are unfortunate enough to be burgled, don’t even contemplate heading downstairs without your MX Board 6 in hand. Trust me. The sheer mass of it in your hands, you will feel invincible. I would remind you however that section 3, Criminal Law Act 1967 does stipulate ‘reasonable force’ with regards to self-defence on your own property, and I have a feeling that if your intruder did end up on the wrong end of your MX Board 6 – the judge may not rule its use as being 'reasonable' at all.

Or if that's not a good enough reason to buy one....

If you are what your read, then what you do is what you type on.