FastTrack Fact 2: Cr*ps printing - taking the gamble out of where your print job goes! 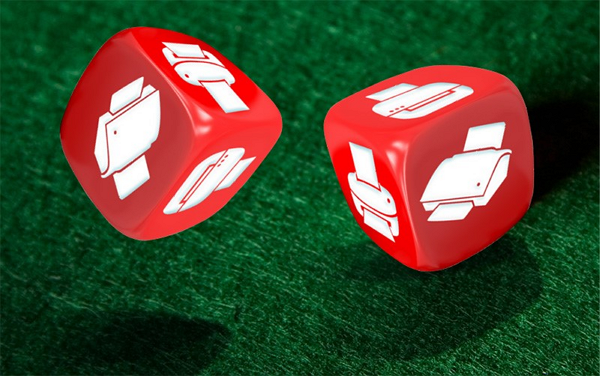 “I Saw Her Standing There” (by the wrong printer)

Not long ago a customer came to us with a bit of a problem, which when we broke it down, kind of reminded me of one of those ‘If Billy had 1 pint of water, a 1Kg bag of marbles of 1/2 inch diameter AND two 45ml cups, how many…’ maths questions from school. Quite often we find, that the limitation with FastTrack is not the software itself, but actually our own ability to break down a customer problem and then our creativity to figure out a way to solve it using FastTrack. To cap it all, it's of critical importance to us that any delivered solution is completely manageable & maintainable by the customer. Solutions which rely on regular professional service calls? That’s just not how we roll.

Here’s a basic break down of their pesky printer puzzle, with staff & printer numbers (dramatically) scaled down to simplify:

Imagine - one large room for dispatch. The room has two desks and one printer over on the left side, and two desks and another printer way over there on the right side of the room.

Being dispatch, people are working on packing stuff, and therefore, it’s essential that each person has access to the right printer. They also need to print to the other printer, but only if theirs is out of service.

So both John and Paul need to have the printer down their side of the room (lefts call it Printer-Left) set as default. But additionally, they still need to have Ringo & Georges printer (Printer-Right) mapped in case Printer-Left has a problem.

Likewise George and Ringo need to have Printer-Right set as their default printer, but again, they still need to be able to print to Printer-Left if their printer goes down.

Hopefully you can see the crux of the problem. Now imagine, if you added many more rooms, with many more desks, and a couple of dozen Beetles tribute bands thrown in many of whom decide to 'swap bands' – what sort of IT printing nightmare would ensue!!! Relevant Beetles song titles that come to mind are ‘Help!’, ‘I’m Down’ & ‘Misery’.

More importantly, if printers stopped working, or jobs printed off the wrong dispatch printer, that would cause havoc and the result of that would be calls to an already hard pressed IT department, delays and perhaps even a tangible cost to the business. No matter how IT tried with windows printer management, messing about with group policy object assignment, at the end of the day, it was a case of ‘Place your bets Gentleman please!”, because that’s how reliable printing was.

Enter FastTrack, which has been designed to deal with exactly such situations as above - and actually far more complex even. Printers (be they on server shares, or direct to IP Printers) are simply loaded into FastTrack, and ‘conditions’ are then set as to who gets what. What’s set as default, STAYS as default. See the image below for a typical list of conditions, but more functionality can be scripted if required. 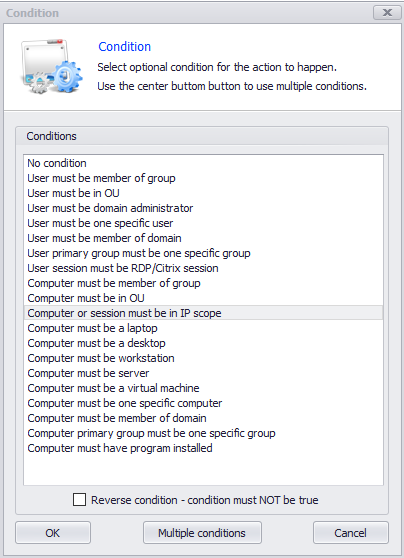 So in 'The End', with some clever logic & group creation, FastTrack was able to solve the entire printing enigma, and once and for all, everyone now was printing to the right (or left!) printer, plus a backup.

It’s therefore true that  ‘Money Can’t Buy Me Love’…. but if you were to use a little to buy your company a copy of FastTrack Enterprise, it can absolutely remove the daily gamble of what & where your default printer is!