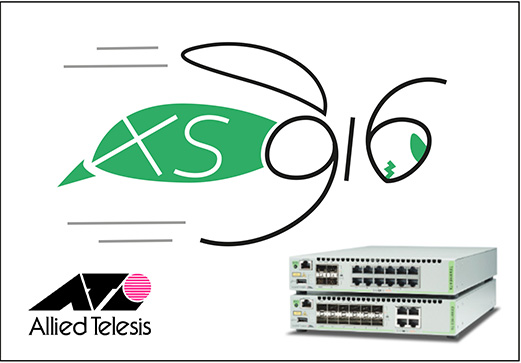 The Hornet has landed!

Let’s face it, alongside predictions of a new little ice age, an invasion of killer False Widow spiders, and of course, giant slugs that will devour your patio, it’s hard to get through a whole year without at least one ‘The giant Japanese hornets are coming’ story turning up in the papers. And so how relieved was I, that this year, we got the first ever story running that squadrons of them, at long last, had finally landed here in the UK. No doubt their delay can be contributed to the ever increasing congestion situation at UK airports, and perhaps even the lack of a third runway at Heathrow. Seriously, these babies are BIG!

Since childhood, I have always been interested in ‘things with stings’, (some have pointed out that my peculiarly spherical office building does somewhat resemble a giant wasp’s nest) and after we gave Allied’s new ‘half U’ 10Gb switch product a run our recently – I felt pretty confident that a switch / hornet analogy was on the cards here! Yes, the XS916MXS, when woken up, poked about a bit and generally annoyed by bombarding its porty thorax with various bench-marking routines – ended up delivering such amazing / bonkers results for a switch in this budget class, that I almost felt like calling the Daily Mail.

XS916MXS: The small 10Gb switch that has wings, and a sting

One of the major benefits for both customers and vendors working with us here at ACC Yotta is that we do quite a bit of interoperability testing as part of our everyday work. After all, customers never want to use a switch just on its own – they’re going to need to connect kit to it, and as such they really need to test both switch, and (for example) VM solution together. Because we actually buy in and use so much of the kit we recommend and supply, this sort of work is possible. It’s in our interests and our vendor’s interests, that these tests result in products becoming formally approved and fully supported on both sides. What it means is that at the end of it, the customer is going to have absolute confidence that the entire solution will work faultlessly.

Because we were so astonished with the results, we asked another vendor of ours to run their own independent tests on the XS916MXS. They ran them, and as a bonus, they were also able to supply us the results from other switches they had tested just for good measure. Unfortunately, we’re not able to actually name the vendor on this blog, due to the fact that they shift quite a bit of Dell kit, and as you can see from the charts, the Dell switches used in the test – err -- they didn’t come out as well as the Allied.

The results are in…

And so – in what surely must be a world first, we are very pleased to share the very first collection of XS916MXS results with comparisons to four other 10Gb switch products. In the first three tests, the XS916MXS wins hands down, it achieves a close second place in the last test. Highly impressive, especially when you consider you could easily buy 2 X XS916MXS for the cost of one of the Mellanox units – which don’t even come with any form of Virtual Chassis Stacking, just simply MLAG.

Test 1 - interesting result for the Mellanox SX1012 - vendor thinks this may be due to the four way break out cable (this switch splits out it's 12 ports into 4 x 10Gb connectors. 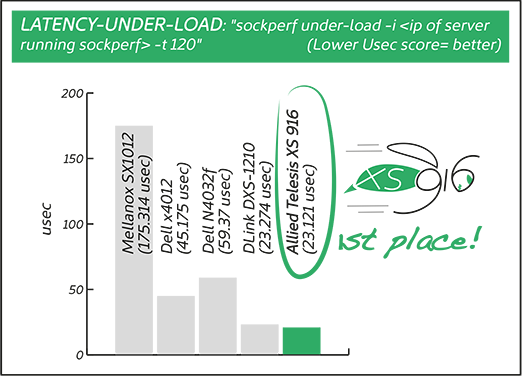 Test 2: Again the SX1012 trails behind the pack on the latency tests, and again, the Allied XS916 is out in front. 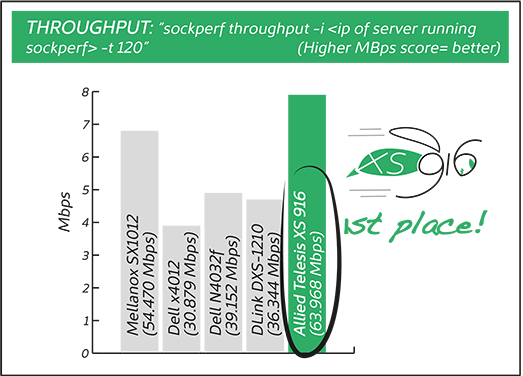 The XS916 flies ahead of the field in the sockperf throughput tests... 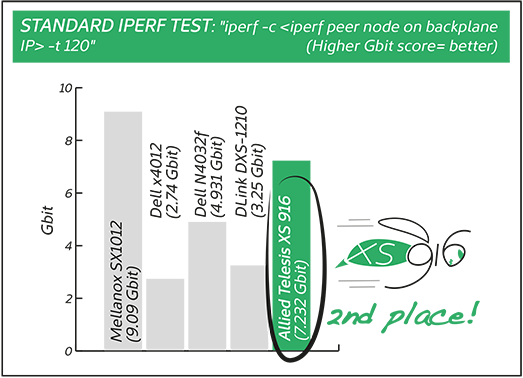 Test 4: The XS916 came in a close second to the Mellanox SX1012 in the standard iperf test.

We have a saying here that Allied Telesis are only known to those in the know – Allied position themselves as the ‘Smart Networking’ company, but what these tests show, is that the ‘smart’ part is simply the decision to buy Allied in the first place. So the next time you are in the market for new networking kit, try to resist buying expensive stuff just because you like the sticker on it.

We wouldn’t want you to get stung now, would we!?

For more information on the Allied XS916, please see the product page for it here.