The Allied Telesis x930 Series of stackable Gigabit Layer 3 switches provides resiliency, reliability, and high performance, making them ideal for network core and distribution solutions. The x930 Series switches are available in 24- and 48-port versions with 10 Gigabit uplinks. The x930-28GSTX includes 24 combo ports for fully flexible deployment where a mix of copper and fiber connectivity is required.

Virtual Chassis Stacking (VCStack™) lets you create a virtual chassis of up to 8 units for increased resiliency and port density. Long-distance stacking means the units can be literally miles apart—perfect for a distributed environment. 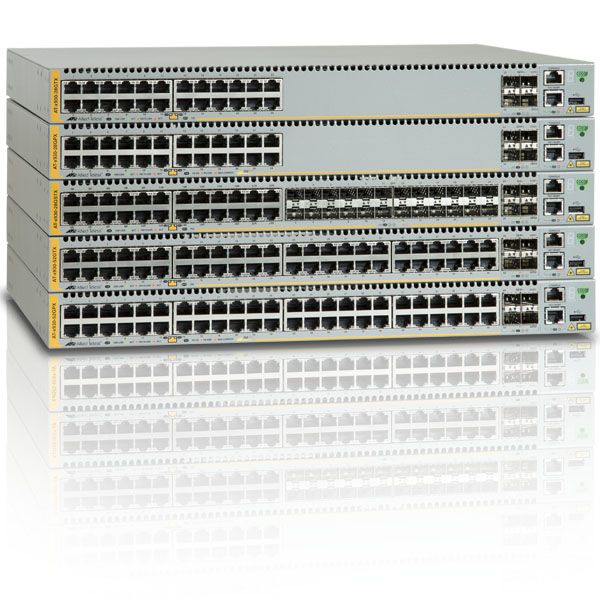 The x930 Series provides a high-performing and scalable solution for today’s networks.

The x930 Series has the capability to manage large-scale wired and wireless networks on a single platform to reduce complexity and increase administrative consistency. The Allied Telesis Management Framework (AMF) is the key to unifying network management. It saves time and reduces cost by automating many every day network management tasks.

For even more benefits, AMF can be combined with the Wireless Manager to reduce the burden of managing, upgrading, and troubleshooting both wired and wireless networks, which further reduces costs and improves service levels across the entire network.

The convergence of network services in the enterprise has led to increasing demand for highly available networks with minimal downtime. VCStack, in conjunction with link aggregation, provides a network with no single point of failure and an easy, resilient solution for high availability applications.

The x930 Series can form a VCStack of up to eight units for enhanced resiliency and simplified device management. Stacks can be created over long distance fiber links with VCStack LD (Long Distance), making the x930 Series the perfect choice for distributed environments.

The x930 Series was designed with reliability in mind, and guarantees continual delivery of essential services. With dual hot-swappable load-sharing power supplies and near-hitless online stack reconfiguration, maintenance may be performed without affecting network uptime.

The x930 Series ensures a futureproof network, with superior flexibility coupled with the ability to stack multiple units. All x930 Series models feature 10 Gigabit and the option of 40 Gigabit uplinks ports and a comprehensive IPv6 feature set, to ensure they are ready for future network traffic demands. All x930 Series switches are Software Defined Networking (SDN) ready and are able to support OpenFlow v1.3. Environmentally friendly The x930 Series supports Energy Efficient Ethernet (EEE), automatically reducing the power consumed by the switch whenever there is no traffic on a port. This sophisticated feature can significantly reduce operating costs by reducing the power requirements of the switch and any associated cooling equipment. 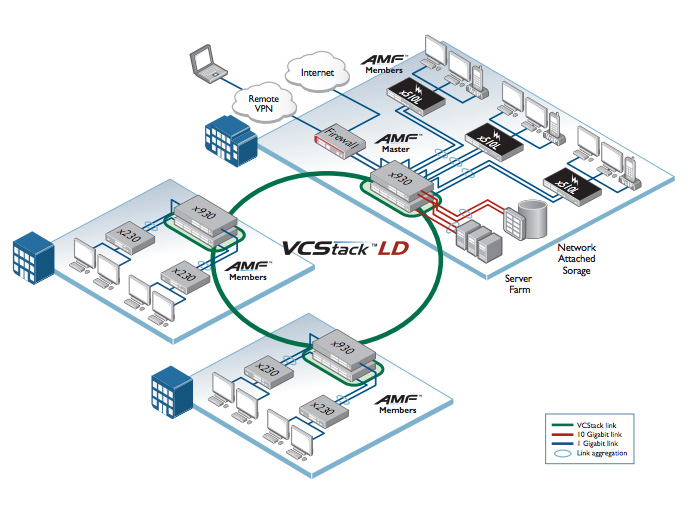 Allied Telesis x930 Series switches are ideal for core and distribution solutions, where resiliency and flexibility are required. In the above diagram, long distance Virtual Chassis Stacking (VCStack-LD) is used to create a single virtual unit out of multiple devices. The increased distance provided by fiber stacking connectivity means that members of the virtual chassis do not need to be co-located. Instead, they can be kilometers apart – perfect for a distributed network environment.

When combined with link aggregation to access switches, this provides a solution with no single point of failure that fully utilizes all network bandwidth, and ensures high availability of data for network users.

AMF allows this large distributed network to be managed as a single virtual entity, greatly reducing administration and automating many day to day tasks.

Allied Telesis x930 Series switches support enterprises and their use of business-critical online resources and applications, with a resilient and reliable solution.

Allied Management Framework: Manage, Backup, Clone and Deploy, all from one screen!

For highly versatile switched ring protection with recovery times as low as 50ms.